Elizabeth Warren is a candidate for the U.S. Senate from the state of Massachusetts. She claims she is of Cherokee descent. She has come under fire for possibly using that claim to give her career a boost at a time when Harvard Law was under pressure to hire more minority professors. We have done extensive research on her ancestry and on the stories she has told trying to back up her claim. There is absolutely no evidence to suggest she actually had a Cherokee or American Indian ancestor. Despite repeated requests for her to release her personnel records from the University of Pennsylvania and Harvard Law School, she refuses to do so.

The stories she has told and our conclusions
Click on the following links to go to the posts.

Did Warren invent the story of racist grandparents?

Bam! Last Nail in the Coffin on that Old Story

Pinch Hitters in the Bottom of the 9th Inning

Was her father really a janitor?

She claims to have Indian blood through her mother so that side of her family is shown here. All were always found in all records as white. They were never found in any Cherokee records or listed as Indian. The Trail of Tears was in 1838-39. We chose to show back to the generation born before that time, though we have traced most her lines back further. Additional information or documentation available upon request.

From the Boston Globe, "Warren’s employment document at the University of Texas allowed her to check multiple boxes specifying “the racial category or categories with which you most closely identify.” The options included “American Indian or Alaskan Native,” but she chose only white."

1993 - Harvard behind in diversity goals

From The Crimson, "As the University winds up a plan launched in 1988 to promote diversity in its faculty and staff, officials express disappointment about their progress."

From the Crimson, "The panelists addressed several of the issues raised by the protesters, including Harvard's response to Mansfield's remarks, the lack of minority faculty and the absence of Asian-American representation on the panel."

1993 - Listed in the article "Women of Color in Legal Academia: A Biographic and Bibliographic Guide"

From Breibart, "An article, “Women of Color in Legal Academia: A Biographic and Bibliographic Guide,” which was published by the Harvard Women’s Law Journal (since renamed the Harvard Journal of Law and Gender) in its Spring 1993 edition (Volume 16), lists Warren as one of approximately 250 “women of color” in legal academia."

From The Crimson, "Visiting Professor of Law Elizabeth Warren, one of the two female scholars offered tenure by Harvard Law School this year, said yesterday that she will not accept the post.

Warren, who holds a tenured position at the University of Pennsylvania, said that her decision was based on "personal reasons." "

1994 - University of Pennsylvania, received a teaching award, designated as a minority

From the Boston Globe, "The University of Pennsylvania, where Warren taught at the law school from 1987 through 1995, listed her as a minority in a “Minority Equity Report” posted on its website. The report, published in 2005, well after her departure, included her as the winner of a faculty award in 1994. Her name was highlighted in bold, the designation used for minorities in the report."

From The Crimson, "Beginning on March 5, the Saturday of Junior Parents Weekend ,the Asian American Association, Raza and other minority groups launched an all-out assault, complete with protests, petitions and postering. one of their primary goals: to increase minority faculty hiring."

"A protester's sign on March 5 displays Harvard's "report card," giving the administration an "A" for "evasion" and an "F" for "action" on the issue of minority faculty hiring The underlying message is that Harvard's facultyis not diverse due to institutionalized racism and stubborn, reactionary administrators."

From The Crimson, "University of Pennsylvania legal scholar Elizabeth Warren has been appointed the Leo Gottlieb Professor of Law at Harvard Law School, University officials announced yesterday.
Warren, who taught at the law school as a visiting professor during the spring of 1993, said yesterday the offer had been available since that time, but added that family circum-stances had kept her from accepting the position until now."

1996 - Touted as Native American in The Crimson

From The Crimson, "Although the conventional wisdom among students and faculty is that the Law School faculty includes no minority women, Chmura said Professor of Law Elizabeth Warren is Native American."

From Politico, " "There are few women of color who hold important positions in the academy, Fortune 500 companies, or other prominent fields or industries," the piece says. "This is not inconsequential. Diversifying these arenas, in part by adding qualified women of color to their ranks, remains important for many reaons. For one, there are scant women of color as role models. In my three years at Stanford Law School, there were no professors who were women of color. Harvard Law School hired its first woman of color, Elizabeth Warren, in 1995." "

Is this the form that she "checked the box" on?

If so, it is clear to see why she won't release the records. She does not legally meet the criteria to be counted as a Native American for diversity reports to the EEOC. 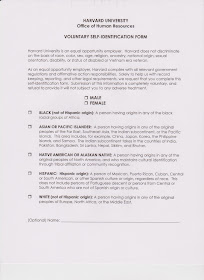 Sources for her entire genealogy include, but are not limited to:

Cherokee documents and records we checked (and found NONE of her direct line ancestors) include, but are not limited to:

Your comments are welcome!